Since the beginning of the academic year, no fewer than 20 students from the Sciences Po Paris campus in Menton have completed a civic training course with the Monaco Red Cross. Active throughout their university year, they have been able to develop new skills and help individuals in need. On Wednesday 15th May, they were paid tribute at a certificate awarding ceremony at the campus.

Monaco, 20/05/2019 – Last Wednesday, the Sciences Po Paris campus in Menton, specialised in the Middle East/Mediterranean region, hosted a certificate awarding ceremony for those taking part in a new project, the purpose of which is to offer second year students the opportunity to gain experience in community involvement within civil society thanks to a civic field course. Several associations in Monaco were able to benefit from a generous helping hand, totalling 75 hours of work over the university year.

They are 20 years old on average and chose the Monaco Red Cross as their civic playing field. They all discovered new experiences, sometimes difficult, sometimes exciting. For many of them, their work involved action at the migrant camp managed by the Italian Red Cross in Ventimiglia. Activities, workshops, language tuition, computer skills, sport, logistics – they split their time between an already busy schedule of study and exams, with trips to the “Campo Roya” and the information point in front of Ventimiglia Station.

The interaction with the staff and volunteers under the authority of the Monaco Red Cross not only enabled them to grow and reveal their potential, but also to develop new skills.  “It meant extra work for the whole team. But we have no regrets and would readily renew the experience, because into the bargain, we were able to support the action of the Italian Red Cross, provide a little human warmth to this transit camp, and get to know extraordinary young people” says Corinne Clerc, responsible for the action carried out by the Monaco Red Cross at the camp.

Three of them completed a civic training course at the Monaco Red Cross Pôle Avenir. Alternating substantive work and activities in Monaco, they appreciated being able to bring knowledge to children about the world around them. “It is extremely uplifting to conduct workshops for children. You realise that there are things that you can offer them. And with Reda, we took part in the Mediterranean Youth Conference in Sarajevo. An experience that we won’t forget!” says Nour, who already completed a civic training course with the Monaco Red Cross, in her first year.

The certificates were presented by Mrs Danielle Cottalorda, a member of the Monaco Red Cross executive board. 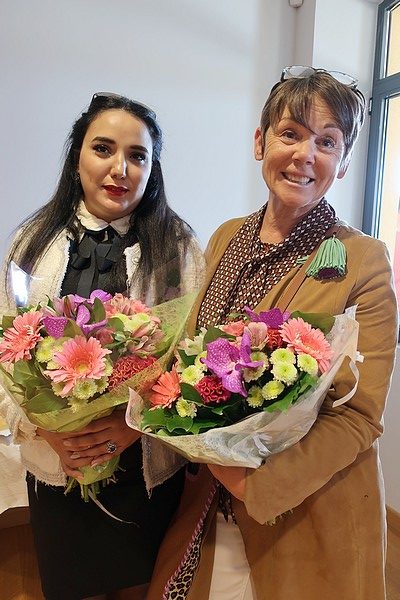 The students also presented the teams who had worked with them lovely bouquets of flowers. The managers of the Ventimiglia camp were also there to share this special moment. Refreshments followed before a final emotional farewell, as most of the students will be travelling overseas in their third year. All eyes are turned now to the end of August when the next group of trainees will be meeting Monaco’s charity organisations at the campus and new adventures will begin to take shape.

*Campo Roya: Name of the migrant camp in Ventimiglia located on the French-Italian border.