Accueil » Burkina Faso : meeting with the children of the Monaco Collectif Humanitaire

Burkina Faso : meeting with the children of the Monaco Collectif Humanitaire

On Friday, 12th January, during a working and goodwill visit to Burkina Faso and following the inauguration of the Loumbila Centre, the Royal Couple made their way to the headquarters of the Burkina Faso Red Cross for an official reception including a tour of the facilities, after which they visited 15 children who have undergone surgery within the framework of the Monaco Collectif Humanitaire project. 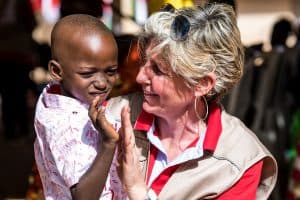 The purpose of this group of Monegasque associations, created in 2008 to celebrate the 50th birthday of the Sovereign Prince, is to sponsor operations on children from developing countries, whose cardiac, or sometimes orthopaedic, pathologies cannot be treated in their country of origin. 340 children have already been cared for since the launch of the project, including 84 children from Burkina Faso. As part of this programme, with the support of the Government of Monaco, and in partnership with the association Rencontres Africaines, the Monaco Red Cross offers sick children the opportunity to receive surgical intervention.

During the visit, the Sovereign Prince and Princess Charlène spoke with the children and presented each of them with a Monaco Collectif Humanitaire backpack with school equipment and a Red Cross bag filled with presents. 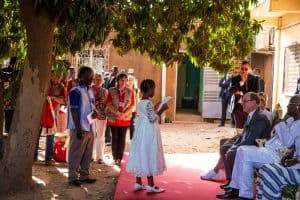 A moment of intense emotion, sharing and spontaneity, in particular during the reading of a letter of thanks addressed to the Sovereign Prince and Princess by little Oumou Penda Seck, aged 9, (who underwent surgery on 29th May, 2015). “You saved my life” … touching words that left no one in the auditorium indifferent, including the Monaco Red Cross volunteers present that day, 3 of which are also host families.

The visit was an opportunity to see how action implemented over the last 10 years on behalf of these sick children has been a real success, in particular thanks to the generosity and devotedness of local correspondents like Rémi Compaoré, the father of a child who underwent surgery for a heart defect, and who supports the Monaco Red Cross in the running of its administrative and logistics services.