Red Cross, Fire Brigade and Carabinieri at “No Finish Line”

Monaco, 15 November 2017 – From 11 to 19 November 2017, the Monaco Red Cross was in attendance at Monaco’s “No Finish Line” running circuit. This year the first-aiders, in collaboration with the Company of the Prince’s Carabinieri and the Monaco Fire Brigade, held two introductory first-aid workshops.

Between 1pm and 6pm, runners and walkers on the legendary 1,400-metre circuit, which is open 24 hours a day during the eight-day event organised by the Children & Future charity for disadvantaged and sick children, had the opportunity to participate in short (30-minute) training sessions on the “Alert – Massage – Defibrillate” procedure, with one hundred and fifty “Little Annie” mannequins provided for participants’ use and given away at the end of the sessions. This procedure is quickly learned but effective, consisting of actions that can be performed by anyone, and can save a life… “Thirty minutes after we had made a start, 60 people had already been trained,” commented Maria-Cécile, a trainer with the Monaco Red Cross. 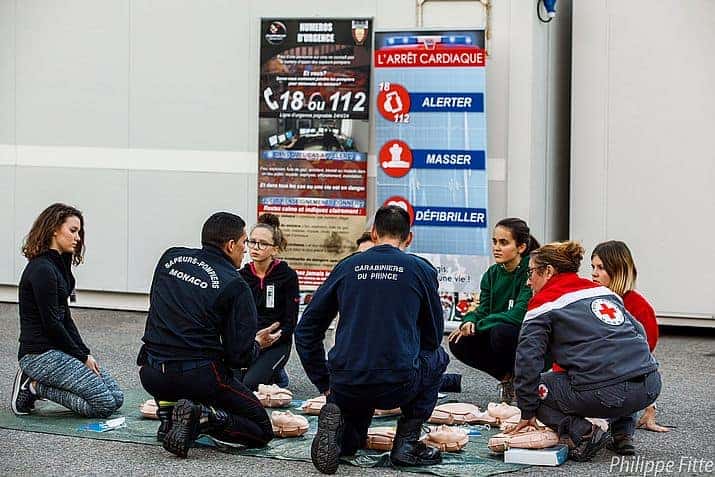 A shared enthusiasm, very willing people, definitely an experience to be repeated: that is the view of Isabelle, another trainer. “Every age group was represented, one 80-year-old grandmother came with her granddaughter to do the training. And we had a number of requests to enrol for the first aid certificate.” James, Louis and Kélian, aged 10, explained that they were there to learn how to respond and how to use the defibrillators that are installed at various points around the city of Monaco.

In parallel, for their “Citizen Days” (citizen action in support of local charities – Ed.), 12 volunteers from CFM Indosuez Wealth Management, the Principality’s number one bank specialising in wealth management, were trained in the four life-saving steps. A volunteer from the Monaco Red Cross and a fireman led this afternoon of training, presenting practical situations with the procedure to follow in the case of suffocation, haemorrhaging, loss of consciousness and cardiac arrest.

“First aid training, and this initiative in particular, has been made obligatory for our counter and reception staff (more than 20 people) in order to ensure the safety of customers and colleagues,” stated V. Danda, head of training at CFM Indosuez.

The main objective of these stands is to make as many people as possible aware of how to save lives with simple actions. Trainers from the Fire Brigade, the Carabinieri and the Red Cross also urge the public to “take the plunge” of obtaining their initial first aid certificate and playing an active role in safety.