Accueil » A donation for the Red Cross

A donation for the Red Cross

The Fidinam International Charity Foundation handed over this week a donation amounting to €1,000,000 to the Monaco Red Cross in support of local initiatives for children and youth in Monaco.

Monaco, 15/10/2019 – Mr Massimo Pedrazzini, in his capacity as Vice President of the Fidinam International Charity Foundation, accompanied by Mrs Giulia Nobili and Sophie Gest, members of the Foundation’s Board, together with Mr Fabien Tardito, Director of Fidinam MFO, handed over to H.S.H.  Prince Albert II, President of the Monaco Red Cross, a donation in an amount of 1,000,000 Euros. The cheque was handed over at the organisation’s head offices in Monaco in the presence of members of the Executive Committee of the Monaco Red Cross, Mr Frédéric Platini, Secretary General, Mrs Bettina Ragazzoni-Janin, Treasurer General and Dr Michel-Yves Mourou, Advisor. 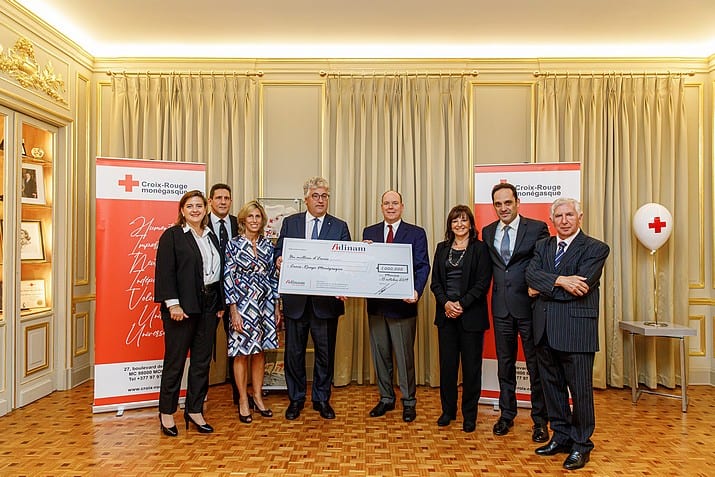 The Fidinam International Charity Foundation, created at the instigation of Dr Tito Tettamanti, actively supports projects to promote education, health and socio-economic development across the globe.

Over the last few years, the Foundation has been keen to focus on local projects run by Monegasque associations and to support initiatives for young individuals as a token of the Fidinam Group’s deep gratitude and attachment to the Principality of Monaco.

The Foundation shares common values and projects with the Monaco Red Cross, particularly in aid of youth and in support of vulnerable individuals.

The funds, deployed over a 5-year period, will be used to fund projects for the benefit of young individuals in Monaco, as well as for seniors and people dependent on care with specific actions tailored to the target population.

Thanks to this donation, the Monaco Red Cross will be able to continue its local efforts for youth confidently and to develop new activities for those who are most in need…