RCM continues its fight against the exploitation of children and the dangers of migration facing young girls working as domestic servants in West Africa, in particular in Burkina Faso.

Regarding the problems of exploitation of young girls employed as domestic help in BF, RCM has been working on a multi-faceted program of education and protection to value the respect for human dignity.

Leaving rural areas and migrating to urban centers where work and education are more accessible, is the hope of many young girls between the ages of 12-17 years old. Unfortunately, this dream is often a delusion. Exploitation, abusive overwork, various forms of violence, little or no compensation, and harassment are all factors which frequently ruin the lives of these girls for whom there is no escape. Others are forced into prostitution with no hope of returning to their families. The situation has reached the point of becoming a national concern.

The CRM has provided education, training and welfare support to young girls working as domestic help since March 2011. 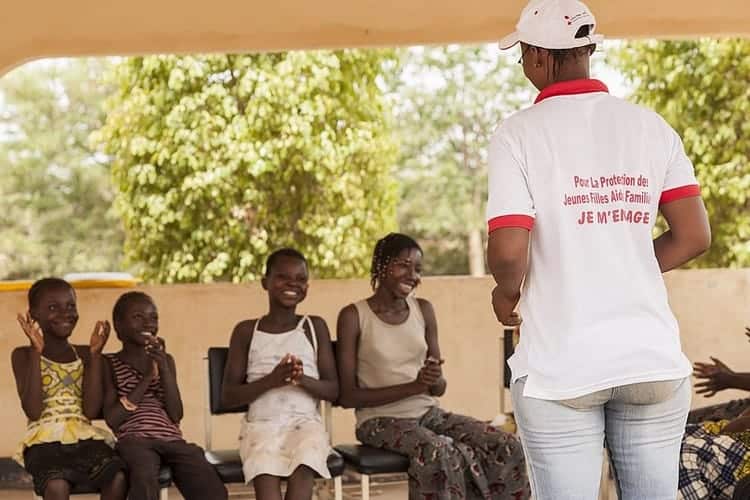 In the province of Poni, located in the south-west of Burkina-Faso RCM decided to set up programs of literacy, training and the introduction of income- generating activities and project management programs. Additionally, nearly 280 young girls were helped with their tuition (school fees, registration fees, the purchase of school supplies,transportation,clothing, and housing). RCM volunteers traveled throughout Poni going door-to-door to educate families (over 5,000 households), and to select the girls who would benefit from this financial aid.

A prevention campaign emerged in Poni, as well as in the large centers cities (Ouagadougou, Bobo-Dioulasso) for young girls and their families to become aware of the dangers existing and where they lie. Additionally, information booths and debate meetings were held which made the population aware of the danger and abuse suffered by some young girls. The team has made radio broadcasts to warn the population. Other means of communication are being studied to find those most impactful.

One a daily, 300 young girls benefit from on site services of psychology, legal,and health by volunteers. RCM are pursuing the implementation of 3 legal rights basis ; right to work, children’s rights, and those of domestic servants, which have been ignored until now. Finally, articles have been regularly printed in both regional and national publications.

Following the encouraging numbers testifying to the success of the operation, CRM has taken the decision to continue the project of helping the young girls of Burkino-Faso and has launched, “Assistance aux jeunes filles aides familiales II.” Generous donations support the renewal of the project, which will be implemented from January 2014 for a period of 3 years.