Accueil » The Red Cross under pressure in Burkina Faso

The Red Cross under pressure in Burkina Faso

Ouagadougou and the main towns of Burkina Faso experienced severe tension between 28th october and 1st november 2014. The Burkina Faso Red Cross, supported by the monegasque Red Cross, intervened throughout the country.

Large-scale demonstrations took place in the main towns of Burkina Faso on 28th, 29th, 30th and 31st October 2014. These demonstrations were a consequence of a bill being introduced to the National Assembly by the Government that would enable Blaise Compaoré, Head of State for 27 years at the time of the events, to run for office again at the presidential elections in 2015. Subsequently, more than a million people assembled on the 28th. The next day, a trade union strike against the high cost of living was conducted. Finally on 30th October, the political opposition and organisations of civil society once again called the population to demonstrate against this bill. This resulted in the draft law amendment being withdrawn by the President followed by his resignation the following day.

During the demonstrations, confrontations between the protestors and security forces resulted in a number of casualties. The Burkina Faso Red Cross, assisted by partner National Red Cross Societies, including the Monegasque Red Cross, implemented a contingency plan in seven towns. 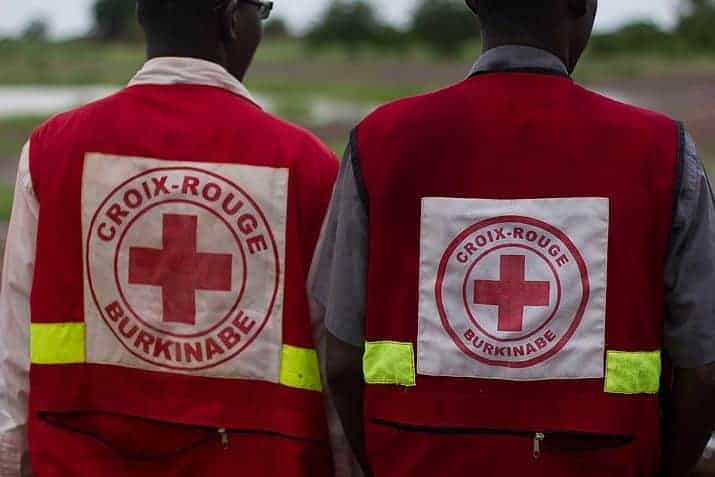 First aid kits, stretchers, tents, radios and rescue vehicles were stationed at strategic areas of the towns, in order to provide initial emergency relief to the victims, evacuate the seriously injured, direct children found alone and help their families to find them by means of messages broadcast via radio.

The 263 volunteers mobilised were able to move around freely and provide aid to those who required it. In all, 370 injured were provided care in the various towns where the Red Cross intervened.

Sayouba Savadogo, one of the four delegates of the Monegasque Red Cross despatched to Niger, had returned to Burkina Faso on leave when the trouble broke out. It was then decided to give support to the teams working for the Burkina Faso Red Cross in Ouagadougou. He found a few moments to testify by telephone:

Question: Did you feel endangered during your intervention?

Sayouba: No, not at all, neither I nor my family. The people who were really threatened were political targets and we are not concerned. Likewise, the teams of volunteers from the Burkina Faso Red Cross are cautious but relaxed with regard to their own safety: Highly motivated, they all understand and respect the Basic Principles of our Movement and act accordingly.. The two other expatriate delegates from the Monegasque Red Cross who were on site, Alexandre and Laetitia, followed strict security measures and touched base frequently with our colleagues at headquarters. The International Committee of the Red Cross (ICRC which takes action during armed conflict) also monitored the situation closely.

Question: How did the Burkina Faso Red Cross learn about what was happening? Are there plans to reinforce their efforts?

Sayouba: All were mobilised. We were careful to be visible so that we were protected by our emblem. The Monegasque Red Cross, which helped to build the capacity of the Burkina Faso Red Cross as far as first aid is concerned, contributed to this success. And by implementing these measures, we noted a need for material resources (radio systems, first aid kits, ambulances…), communication requirements and a need for training for the volunteers (first aid, psychosocial support). The Burkina Faso Red Cross hopes to work actively with its partners in order to improve its efficiency during similar events. We do not know how the situation will develop. For the moment order has been restored but things can change quickly…

Healthcare coverage for these demonstrations still continues with the monitoring of certain child victims. The project team responsible for the protection of young female home helps, developed by the Monegasque Red Cross, takes care of lost or injured children.

Building on its reputation and respect for its emblem by the Burkina Faso people, the Red Cross volunteers were able to provide assistance to many victims in the various towns of the country where demonstrations were held. Thanked and congratulated by the population during the demonstrations and up to the present day, they felt pleased with their actions.