Accueil » Activities throughout the summer with the monegasque Red Cross

Activities throughout the summer with the monegasque Red Cross

With three dates over the summer period at the Prince Albert II Leisure Centre, the Monegasque Red Cross had the opportunity to raise the awareness of 69 children and their activity leaders, and thanks to a range of games providing them with key knowledge.

Having benefitted from the experience of the Swiss, French and Belgian Red Cross Societies, a team of volunteers from the Monegasque Red Cross set up workshops for children during the « grande braderie » on 4th May 2013. Due to the success of the event, it was relaunched in May 2014, with a few improvements. The team, now fully trained and motivated, naturally got in touch with the Monaco leisure centre to set up several half days of activities throughout the summer.

To begin with, the children were able to watch a cartoon and took part in an interactive session including games and riddles in order to find out the history, basic principles and action of the Red Cross and the Red Crescent in Monaco and worldwide.

Then, depending on their age, they took part in mini workshops dealing with concepts such as safety at home and on the street, solidarity, the impact of the sun, respect for nature, humanitarian values… 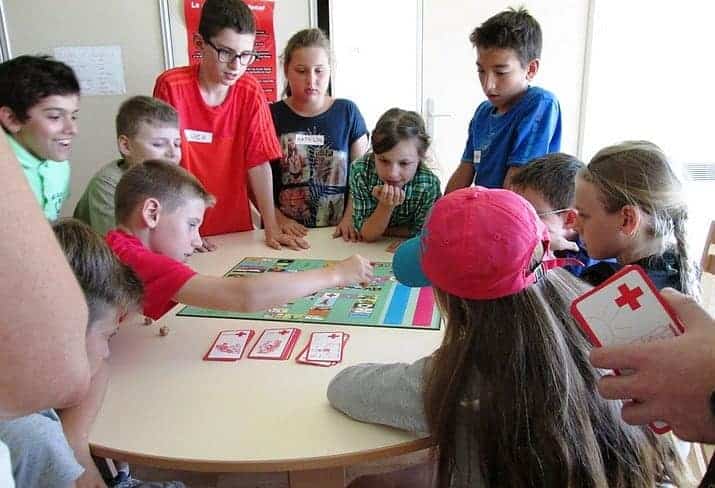 They also learned how to raise the alert in the event of an accident, or learned about international humanitarian law which protects those not taking part in armed conflict and for which the Red Cross has been the guarantor for 150 years…

All the sessions ended with the distribution of certificates and small gifts, as well as some documentation to share their knowledge with their families. And the results are extremely positive, both from the point of view of the children and the activity leaders. « I love the Red Cross! » was what we heard being chanted at the end of the sessions.

Volunteers from the Monegasque Red Cross have already planned to develop these activities and new partnerships, as was the case last Friday with the Arbre association based in Nice, which resulted in an activity being set up focusing on the prevention of risks associated with the sun. 6 to 8 year-olds were delighted to leave with an organic after sun cream for their mums which they learned how to make themselves!

The Red Cross has approached the Office of National Education, Youth and Sport and hopes to develop this type of activity again this year, both in and out of school. A few activities have already been scheduled for the beginning of the new school year.