25th surgical mission of the Monaco Red Cross in Niger

The team has completed a new successful mission

Between last 31 August and 7 September, for the eleventh consecutive year, a strongly motivated and well-prepared team went to the Niamey National Hospital, Niger, to carry out difficult surgical operations and train personnel on site. Together with Arnaud Jamin, the Red Cross delegate in charge of actions in West Africa, and under the supervision of Claude Fabbretti, in charge of international programmes of the Monaco Red Cross, orthopaedic surgeons, physicians and nurses worked relentlessly with these patients, most of them very young and heavily handicapped. 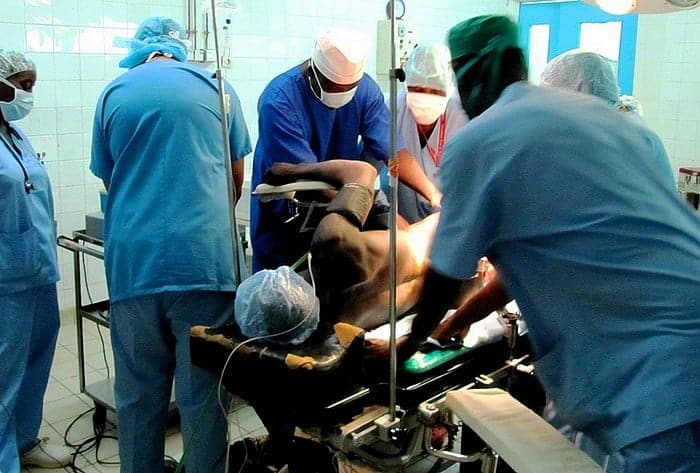 Patients will finally be able to live normally, to find a job and to help their community in turn.

Each of the operations will enable patients to become mobile again, so they can finally live normally, find a job and help their community in turn.

Once again, the team was able to count on the support of the Niamey National Hospital, partner of the Monegasque Red Cross, which made its human and technical means available, as well as its infrastructures and surgical blocks, with the kindness of the Niger Red Cross. This historical partnership has enjoyed the support of everyone, even informal, for the missions to go well and for the Monegasque team to operate in the best conditions. Within one week, and in spite of a discernible social strain related to heavy floods and a tangible security strain, out of the 150 patients consulted before the mission, 22 were operated on.

“The process before the operation is arduous: first of all 59 patients were selected by the local staff according to medical and social criteria. Then, 30 patients were selected for compulsory anaesthetic consultations, and 20 of them were accepted by the orthopaedic surgeon. Two additional patients underwent a second operation after the last surgical mission of April 2012” Claude Fabbretti calculated when he returned from his mission.

Totally since the beginning of the operation in 2011, 2,177 persons have been seen and referred during consultations, 715 patients were treated, and 415 hip replacements were put in, most often on patients under 40 years of age.